History has an eerie way of repeating itself. Just take a look at what was happening in the oil markets back in 1985 and compare it to today.

Over the last 30 years, there have been only two times that crude oil prices have fallen 50% or more from their peak levels. Why does this matter? Think about it: After the price plunge in 1985–86, oil prices remained low and stable for 15 years, except for a temporary blip during the lead-up to the Persian Gulf War in 1991. 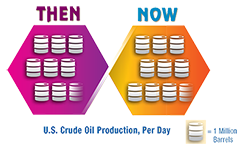 Then: Beginning in 1985 and continuing in 1986, crude oil prices fell by about 67%
Now: Beginning in 2014 and continuing in 2015, crude oil prices dropped by 60%
Could oil prices remain stable for that long again?
As always, it remains to be seen how oil prices will play out in the years ahead, since factors such as severe weather, the state of the economy and world events affecting energy production are unpredictable. But with U.S. oil production levels surging strongly, there is a better chance that oil prices may stay at lower levels in the future.