Home » Here and Now: Which Fuel Makes You Feel Better? 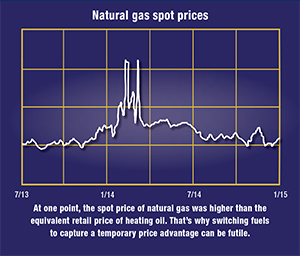 More and more, people who declined to convert their heating systems from oil to natural gas are looking pretty smart. Consider this:

Supply concerns plague natural gas
Limitations on the way that natural gas is distributed continue to create supply challenges—and price concerns. Heading into the winter of 2014–15, natural gas prices had reached their most expensive point in more than a decade because of concerns that pipelines might not be able to distribute enough fuel.*
Other factors raising concerns about the direction of natural gas prices include:

This all just goes to show that these days, oil heat customers like you have a lot less to worry about—and many more reasons to smile.
*Bloomberg News, 10/6/14